When it comes to charting a career path, Brittani Harmon knows how important it is to be exposed to new opportunities as a student. 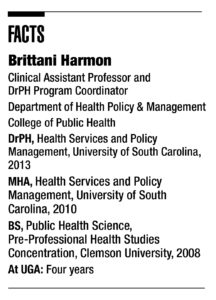 As a high school student in South Carolina, Harmon participated in a weeklong residential program at Clemson University aimed at recruiting high-achieving students of diverse backgrounds. The program introduced participants to the school’s campus life and educational offerings, including public health.

“I don’t know that I would have known what public health was in high school,” said Harmon, “so it was eye opening to hear about the different opportunities through the program counselors talking to us about their health majors.”

It was a revelation that led Harmon to study public health at Clemson and later health care administration at the University of South Carolina.

Now, as a clinical assistant professor in the College of Public Health, she often calls on her past experiences, both in the field and within academia, to better prepare students for their future careers.

At UGA, Harmon teaches a range of public health courses with focuses in health informatics, health policy and health administration.

Just before joining the public health college, Harmon completed a fellowship in public health informatics at the U.S. Centers for Disease Control and Prevention.

“It’s that intersection of technology and people, she said, “whether that be medical providers or epidemiologists.” As an informatics fellow, Harmon was deployed to centers of health emergencies where it was her job to determine how technology could be used to address specific public health issues.

For example, during her CDC fellowship in 2014, Harmon was deployed to rural Scott County, Indiana, which was experiencing an outbreak of new HIV infections. Harmon’s team was called in to make sense of the multiple data sources collecting information on HIV infections.

“There were multiple systems collecting data on HIV that didn’t talk to each other, but they were trying to collect the same data,” Harmon said. “So, we needed to create a system specifically for that outbreak so that all the stakeholders could get the information they needed and share information in one central database.”

Harmon uses experiences like these to inform her current research and to enrich the classroom experience for her students.

“A lot of the case studies I use are actual situations that happened to me or my colleagues,” she said. “It helps build content that you can’t always get from a textbook. It gives students a sense of what to expect in the field.”

For students in the college’s Doctor of Public Health, or DrPH, program, offered at UGA’s Gwinnett campus, this pedagogical approach is particularly important.

The DrPH is not your typical doctorate, said Harmon, who serves as the program’s coordinator.

“It’s more applied and practical in nature,” she said, and geared toward working public health professionals.

“Translation from research to practice is what makes this program and the degree unique,” Harmon added. “Traditional doctoral students do a lot of research, but they may not necessarily see it through to see how it looks in practice.”

In contrast, her DrPH students are often working on dissertation projects that align with their professional goals, such as developing policies to reduce pedestrian deaths by expanding bike lanes on public roads.

In 2018, Harmon received funding to launch her own version of the residential program that put her on the path to her eventual career. The funding was provided by UGA’s Office of Multicultural Services and Programs, the Dean’s Office in the College of Public Health and the Office of the President. The funds from the Office of the President were part of the first round of the New Approaches to Diversity and Inclusion grant program.

That year, the Pre-Collegiate Summer Institute at the public health college hosted 22 high-achieving Georgia high school students from diverse backgrounds who were interested in studying health or medicine. Over the week, students engaged in hands-on, immersive public health courses taught by CPH faculty, and they also had the chance to explore UGA’s main campus and Health Sciences Campus.

Of the 22 students in the inaugural cohort, 17 went on to apply to UGA. All were accepted, and nine are current freshmen. The New Approaches grant for Harmon’s program was renewed in 2019 during a second round of funding from the Office of the President. The second cohort of the PCSI was originally scheduled for June 2020, but has been postponed due to the COVID-19 pandemic.

From high schoolers or working professionals, Harmon is always grateful to hear that she is helping students achieve their career goals.

“It’s nice to see that you’re making some kind of impact in people’s lives because you don’t always see it from week to week or semester to semester,” she said.